On December 19, CLBR will have its annual year-end Heroes and Zeros episode in which, with guests Brenda Christensen, Denise Howell and Dan Tynan, we highlight those doing wonderful things on the internet and those deserving a cyber lump of coal.

On Valentines Day 2014, our hearts were broken when a gunman opened fire at Marjory Stoneman Douglas High School in Parkland, Florida and killed 17 students and staff members.  This has become an all too common occurrence and we all knew that after the ritual expression of “thoughts and prayers” nothing would happen in response.

[t]his time, something different is happening. This time, our children are calling us to account.  The Parkland, Fla., students don’t have the kind of lobbyists or big budgets for attack ads that their opponents do. Most of them can’t even vote yet.  But they have the power so often inherent in youth: to see the world anew; to reject the old constraints, outdated conventions and cowardice too often dressed up as wisdom.  The power to insist that America can be better.

The students who survived the massacre refused to let them happen and through television and social media engineered one of the largest protests in America a mere 38 days later.  Through sheer will and determination, they changed the momentum on the gun control debate.

While Washington was being led by the enfant terrible, California had the steady hand of Governor Jerry Brown who will be the third longest-serving Governor in America history when he steps down later this year.   Brown and the California legislature passed a landmark climate change bill and a comprehensive privacy bill that has reignited the debate over a federal privacy law.  In addition, it took on the Trump administration by challenging the FCC’s order repealing net neutrality and by passing a law to protect net neutrality in California.

Martin Luther King, Jr. once said, “”[i] the end, we will remember not the words of our enemies, but the silence of our friends.”  One of the most disappointing aspects of the Trump era has been the silence of Republicans (or “faux resistance ala Tweet but don’t act” Republicans like Jeff Flake) as Trump assaulted democratic institutions and norms.  Conservative lawyer George Conway, the husband of the formidable Trump counselor Kellyanne Conway, has been one of the few who has spoken out against Trump’s assault on the rule of law.

Max Boot, William Kristol, Jennifer Rubin, Nicole Wallace, George Will and others come to mind, but none of them have a spouse in the administration.

I have known Phyllis Gottlieb for over a decade but never knew what she endured working for Les Moonves as a Vice President with Lorimar Entertainment.  She came forward to detail how he sexually assaulted her and her story along with those of other brave victims helped topple the CBS CEO.

Kashmir Hill, a past CLBR guest, is one of the premier journalists addressing privacy today.  This year alone she wrote brilliant pieces on how an online stranger can wreak havoc on people’s lives and exposed how Facebook mines data from users and, in some cases, puts them in danger as a result.  She won the National Press Foundation’s 2018 Technology in Journalism Award for being a human guinea pig by exposing how much data a “smart home” collects from users – a point she converted into a Ted Talk.

There is an assumption that monopolization can be difficult in the tech sector because constant innovation makes creates a risk that a new competitor will emerge that theoretically acts as a check on potentially monopolistic behavior (i.e., high prices).  In 2017, that assumption was upended by Yale law student Lina Kahn published “Amazon’s Antitrust Paradox” that argued that Amazon was exercising monopoly power despite low prices and reignited antitrust scrutiny of Big Tech.

Amazon’s Antitrust Antagonist Has a Breakthrough Idea September 7, 2018 at 04:30AM With a single scholarly article, Lina Khan, 29, has reframed decades of monopoly law. https://t.co/HgNiH0CTjK https://t.co/RkLOx3sEg2 pic.twitter.com/1rGDEZ2coD

I first met Cam Kerry when he was General Counsel of the Department of Commerce and I was part of the delegation he led to China as part of the 2012 US-China Legal Exchange.  Since the end of the Obama administration, Kerry has been an important voice in the privacy debate in the US and abroad and has been kind enough to join the show on two occasions.

After the death of President George H.W. Bush, Kerry reflected 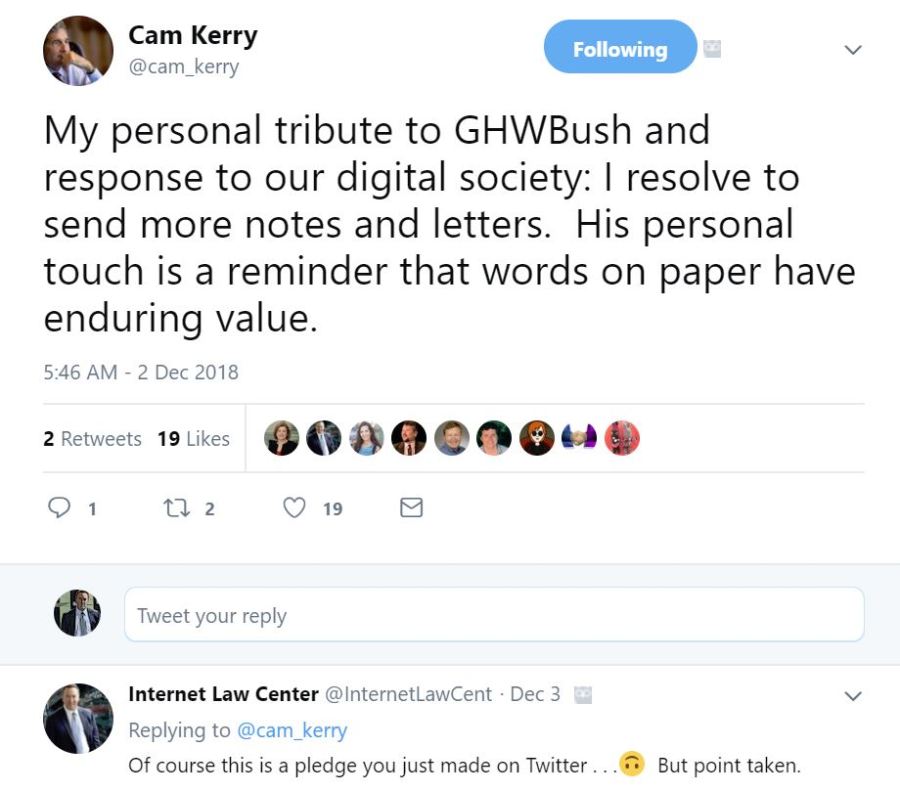 Cam taught me a lesson in both leading by example and good old New England values, by sending me a note indicating he enjoyed my snarky reply.   I will reciprocate and let him know that he has been named a CLBR hero.

In early 2017, Microsoft CEO Brad Smith called for a Digital Geneva Convention based on the following principles

This ultimately led to the Cybersecurity Tech Accord signed by over 60 global companies and the Paris Call for Trust and Security in Cyberspace signed by 57 countries.

The self-described “Grump lady of tech” is also one of its preeminent journalists.  She has been especially valuable this year in highlighting the moral vacuum at the center of Silicon Valley with columns in the New York Times on Who Will Teach Silicon Valley to Be Ethical? and the column below which drew an apt metaphor between the cloud of smoke that hung over the Bay Area due to the wildfires and tech current state of affairs.

More specifically how can tech renew after this “weather of catastrophe”? Opinion | Can California Be Saved? – The New York Times https://t.co/LZkP2uzDIa

Listen on Wednesday, December 19th at 1PM ET / 10AM PT on WebmasterRadio.fm as I discuss the Heroes and Zeros for 2018 with our special guests – Brenda Christensen, Denise Howell and Dan Tynan.