Author Sarah Kendzior Gives
The View From the Flyover Country

Through the Miami Book Fair and our own programming, we have had several shows talking about Detroit and its struggle for a renaissance.  Today we feature an author from another part of the Midwest – St. Louis academic and journalist whose 2015 self -published book, The View from Flyover Country: Dispatches From the Forgotten America is now a New York Times best-seller.  Now, The View from Flyover Country is being released in print with an updated introduction and epilogue that reflect on the ways that the Trump presidency was the certain result of the realities first captured in Kendzior’s essays.

Praise for The View From Fly Over Country:

It’s a call to arms, highlighting the struggles of disenfranchised, overworked, and underpaid Americans, and urging our elected officials to recognize and address the inequalities that have become even more pronounced since when she originally wrote the essays.

If you follow Sarah Kendzior on Twitter, you know she warned that Donald Trump would likely win, even as Republicans scoffed at the idea; and she warned people to keep an eye on Paul Manafort long before he was in the headlines. Kendzior is no psychic. She’s just whip-smart and an expert on authoritarian governments. She’s also that rare writer with an analyst’s brain and an empath’s heart… Though the essays are topical and political…one senses they’ll stand the test of time, just for the beauty of the prose and the soundness of the philosophy.

Sarah will be on a panel at the Miami Book Fair “Will American Democracy Survive Trump?” with Steve Almond and past CLBR guest David Cay Johnston on Saturday, November 17 @ 12:30 pm.  For details, click here. 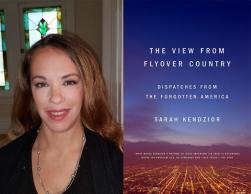 Sarah Kendzior is a writer who lives in St Louis, Missouri.  In addition to The View From Flyover Country, she is known for her reporting on political and economic problems in the US, her prescient coverage of the 2016 election and the Trump administration, and her academic research on authoritarian states in Central Asia. She is the co-host of Gaslit Nation, a bi-weekly podcast which covers the rise of autocracy in the US and corruption in the Trump administration and appears regularly on MSNBC.

She has a PhD in anthropology from Washington University in Saint Louis (2012) and an MA in Central Eurasian Studies from Indiana University (2006). Her work focuses on the authoritarian states of the former Soviet Union and how the internet affects political mobilization, self-expression, and trust.  She has been named by Foreign Policy magazine as one of “the 100 people you should be following on Twitter to make sense of global events”.

Her unique background was comically captured in her recent interview with Seth Meyers.

Our interview with Obama National Security Council Alum Rumana Ahmed who is one of eighteen former Obama administration contributors to “West Wingers: Stories from the Dream Chasers, Change Makers and Hope Creators Inside the Obama White House” was postponed today’s show due to the death of West Winger contributor Michael Robertson.  Our sympathies to Ms. Ahmed and the West Winger family.

We at CLBR are deeply saddened by the events of the past week from the pipe bomber, to the senseless murders and hate crimes in Louisville and Pittsburgh and condemn the rhetoric that inspired it.  We have been and will continue to be a platform that addresses this alarming rise in online hate speech.

CLBR has had a number of shows on the rise of online hate, most recently with this 2017 show with Heidi Beirich from the Southern Poverty Law Center on the State of Hate in the USA https://t.co/ouKr6rxFqF #splcenter #TreeOfLifeSynagogue

i will be moderating a panel on CDA230 with Sophia Cope from the #EFF and Prof. #ericgoldman at next week's IP Institute in San Jose. Don't miss it! https://t.co/WMszlDeOf0 #scopesetic #CLA_IP

Cesar Sayoc Threatened at Least 50 Public Figures and Outlets on Twitter But Was Never Stopped https://t.co/l7YLo6kLrW

Congratulations to the Boston Red Sox on winning the 2018 World Series!!!