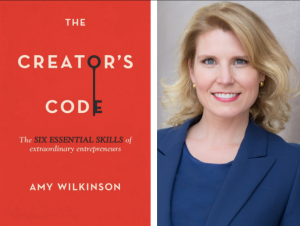 Each of us has the capacity to spot opportunities, invent products, and build businesses—even $100 million businesses.

How do some people turn ideas into enterprises that endure? Why do some people succeed when so many others fail? The Creator’s Code unlocks the six essential skills that turn small notions into big companies. This landmark book is based on 200 interviews with today’s leading entrepreneurs including the founders of LinkedIn, Chipotle, eBay, Under Armour, Tesla Motors, SpaceX, Spanx, Airbnb, PayPal, Jetblue, Gilt Groupe, Theranos, and Dropbox.

On June 12, 1970, Pittsburgh Pirate ace Dock Ellis threw a no-hitter against the San Diego Padres allegedly while tripping on LSD.  The video below is an animated short film by James Blagden about the game, “Dock Ellis and the LSD No-No”, features narration in Ellis’ own voice, taken from a 2008 NPR interview.

Last year, a Kickstarter-funded documentary No No: A Dockumentary was released and is available online.

FB Page: No No: A Dockumentary (about Dock Ellis)

LAST WEEK AND NEXT WEEK

Listen to the full episode below.