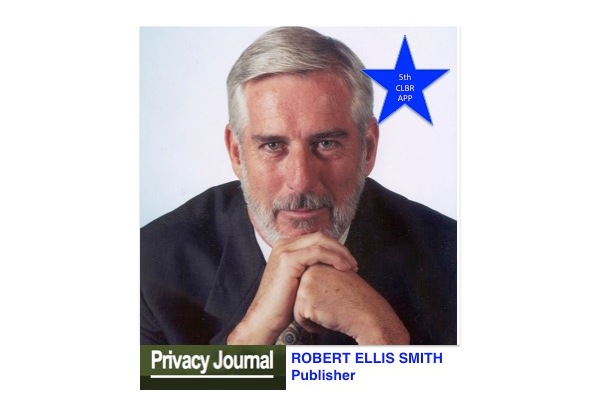 Robert Ellis Smith, the Privacy Paragon from Providence and fellow Hoya Lawya, returns to discuss the latest privacy developments including:

In addition, with the release of the movie Selma and the 50th anniversary of Bloody Sunday weeks away, we may ask Smith to recall his role as a writer and editor with the Southern Courier.

Smith is an American attorney, author, and a publisher/journalist whose focus is mainly privacy rights.  He also is an adjunct professor at Roger Williams University School of Law in Bristol, Rhode Island.

Robert began his career in journalism during high school and while attending Harvard. He was President of The Harvard Crimson. After college, he wrote for newspapers such as the Detroit Free Press, Newsday in New York, and the Southern Courier. He also worked for the ACLU.

Since 1974, he has published Privacy Journal newsletter as well as several books, such as Ben Franklin’s Website: Privacy and Curiosity from Plymouth Rock to the Internet (2000/2004). From the book:

Just what is privacy? It is the desire of each of us for physical space where we can be free of interruption, intrusion, embarrassment, or accountability and the attempt to control the time and manner of disclosures of personal information about ourselves.

He has written Workrights (1983, E.P. Dutton),The Law of Privacy Explained (1993, Privacy Journal), and Privacy: How to Protect What’s Left of It (1979, Doubleday) The 1979 book was nominated for a National Book Award.  For more than 35 years Smith has edited successive editions of Compilation of State and Federal Privacy Laws, which is now available in eBook mode as well as an edition available for loading onto hand-held devices. This allows individuals to consult their palm devices, in the workplace or the marketplace, to determine whether privacy protections cover certain transactions. He continues to write and publish Privacy Journal, and is often called to speak and testify concerning privacy rights. Smith has twice been asked to write the definition of privacy for the World Book Encyclopedia.

“Privacy Journal,” one of the longest running newsletters in North America, celebrated its thirty-seventh anniversary of continuous monthly publishing in November 2011. Smith is the author also of “Our Vanishing Privacy” (Loompanics Unlimited, 1993). He is co-author of “The Big Brother Book of Lists” (1984, Price/Stern/Sloan), published to commemorate the fateful year of 1984.

Smith, formerly active as a land conservationist for environmental protection, has written four editions of a quiz book called Block Island Trivia, about the tiny island off the coast of Rhode Island. In the 1990s he was president of the Block Island Conservancy, a non-profit group that purchases land to maintain it as open space.  And he was vice chair of the Coastal Resources Management Council, which is responsible for preservation and orderly development of land within 200 yards of the entire coast line of Rhode Island.

FYI – For the uninitiated, Block Island has been called “heaven on earth” by NBC News Anchor Brian Williams.  See video below.

Google Controversies and the US Online Gambling Debate (2012)

The Magnetism of Islands [Kindle Edition]

Our Vanishing Privacy: And What You Can Do to Protect Yours Paperback – May, 1993

Privacy, how to protect what’s left of it Hardcover – 1979

Block Island is part of the U.S. state of Rhode Island. It is located in the Atlantic Ocean about 13 miles (21 km) south of the coast of Rhode Island, 14 miles (23 km) east of Montauk Point on Long Island, and is separated from the Rhode Island mainland by Block Island Sound. The United States Census Bureaudefines Block Island as Census Tract 415 of Washington County, Rhode Island. As of the 2010 census the population of 1,051 lived on a land area of 9.734 square miles (25.211 km2).[1] The island is part of the Outer Lands region, a coastal archipelago made by the recessional and terminal moraine that resulted from the Wisconsonian Laurentide glacier retreat, about 22,000 years ago.[citation needed]

The Nature Conservancy added Block Island to its list of “The Last Great Places”; the list consists of twelve sites in the Western Hemisphere. About 40 percent of the island is set aside for conservation.[2] Presidents Bill Clinton,[3][4] Dwight D. Eisenhower,[5] Franklin Delano Roosevelt,[6] and Ulysses S. Grant[7][8] have visited Block Island. Other famous visitors include Amelia Earhart and Charles Lindbergh, who each made separate trips to the island in 1929.