FEATURED SEGMENT
PAUL BARRETT AND THE LAW OF THE JUNGLE

This week’s CLBR features author Paul Barrett as he discusses his new book, “The Law of the Jungle” – a cautionary tale about our legal system. 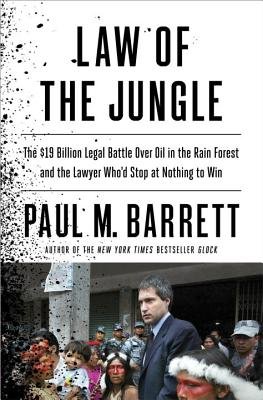 The gripping story of one American lawyer’s obsessive crusade—waged at any cost—against Big Oil on behalf of the poor farmers and indigenous tribes of the Amazon rainforest.

Steven Donziger, a self-styled social activist and Harvard educated lawyer, signed on to a budding class action lawsuit against multinational Texaco (which later merged with Chevron to become the third-largest corporation in America). The suit sought reparations for the Ecuadorian peasants and tribes people whose lives were affected by decades of oil production near their villages and fields.  During twenty years of legal hostilities in federal courts in Manhattan and remote provincial tribunals in the Ecuadorian jungle, Donziger and Chevron’s lawyers followed fierce no-holds-barred rules. Donziger, a larger-than-life, loud-mouthed showman, proved himself a master orchestrator of the media, Hollywood, and public opinion. He cajoled and coerced Ecuadorian judges on the theory that his noble ends justified any means of persuasion. And in the end, he won an unlikely victory, a $19 billion judgment against Chevon–the biggest environmental damages award in history.  But the company refused to surrender or compromise. Instead, Chevron targeted Donziger personally, and its counter-attack revealed damning evidence of his politicking and manipulation of evidence. Suddenly the verdict, and decades of Donziger’s single-minded pursuit of the case, began to unravel.

Written with the texture and flair of the best narrative nonfiction, Law of the Jungle is an unputdownable story in which there are countless victims, a vast region of ruined rivers and polluted rainforest, but very few heroes.

“Paul Barrett’s Law of the Jungle is a cautionary tale — a deeply reported, well-written reminder that to be credible and effective, the fight against environmental misconduct must be waged within the rule of law. Our legal system can be a powerful force for environmental progress, but its rules have to be respected.”
—Fred Krupp, President, Environmental Defense Fund

“Paul Barrett’s Law of the Jungle is the inside story of the international trial of the decade—a high stakes fight over oil, blood and money and a protagonist who is as fascinating as he is perplexing.”
—Jeffrey Toobin, author of The Oath and the Nine

“An engrossing, captivating account of litigation run amok. Barrett’s comprehensive, detailed book demonstrates all that is wrong with the American litigation system. Required reading for anyone who not only wants to learn more about protracted lawsuits in America but yearns for a page-turning legal thriller. I can’t wait for the movie.”
—Kenneth R. Feinberg, court-appointed special master for compensating victims of the 9/11 attacks, BP oil spill, Virginia Tech massacre, asbestos insulation, Dalkon Shield IUD, and Vietnam defoliant Agent Orange

Paul M. Barrett is an assistant managing editor and senior writer atBloomberg Businessweek.  He is the author of the New York Timesbestseller Glock: The Rise of America’s Gun, American Islam: The Struggle for the Soul of a Religion, and The Good Black:  A True Story of Race in America.  He lives and works in New York City.

Four major fires break out on the shores of Lake Michigan in Chicago, Peshtigo, Wisconsin, Holland, Michigan, and Manistee, Michigan including the Great Chicago Fire, and the much deadlier Peshtigo Fire.

In the Argonne Forest in France, United States Corporal Alvin C. York kills 28 German soldiers and captures 132, for which he is awarded the Medal of Honor.

The Meuse-Argonne Offensive was  the largest in United States military history at that time, involving 1.2 million American soldiers,  The offensive was was “probably the bloodiest single battle in U.S. history,” with 117,000 casualties and over 26,000 killed.